Jesus answered them and said, “Truly, truly, I say to you, you seek Me, not because you saw signs, but because you ate of the loaves and were filled. Do not work for the food which perishes, but for the food which endures to eternal life, which the Son of Man will give to you, for on Him the Father, God, has set His seal.
~John 6:26-27

The day after Jesus had miraculously fed the 5,000, the crowd that had been there and ate were diligently searching for Him (vv. 22-24). Jesus had snuck away from the crowd when He realized that they intended to make Him king (v. 15) and now with His disciples also gone, they were wondering as to His whereabouts.

When they find Him, Jesus rebukes the crowd for seeking Him for the material benefit of the food that He had provided. The ultimate purpose of the miracle was to point to Who Jesus is. In fact, John refers to Jesus’ miracles as signs. They indicated or “signified” that Jesus was the Son of God and the Messiah that could give them eternal life. However, the crowd had missed the point and were more focused on the actual sign instead of the One to Whom it pointed. They were more concerned with the food which perishes instead of the food which endures to eternal life. This particular miracle was intended to direct the people to Jesus Himself, the bread of life who can eternally satisfy one’s spiritual hungering and thirsting (v. 35). The bread that they wanted from Jesus would leave them “physically” hungry again but the spiritual bread that He is would never leave them “spiritually” hungry. They missed the spiritual reality of the miracle because they were too caught up with the physical. They were seeking Him because of what He could give and not for Jesus Himself.

God often gives us “signs” in our everyday lives. Every gift that God gives us points to Him and directs us to worship Him. We often, just like the crowd that sought Jesus, get so caught up with the gifts themselves that we lose sight of the Giver that they point to. If we are not careful, we wind up worshiping the gifts and not the Giver. We should not seek God because of the gifts that He gives but instead for Who He is. Attempting to find joy in the gifts will not last and will result in us winding up empty, but rejoicing in God brings eternal joy and satisfaction. Take some time this month to consider the many gifts that God has given you (your family, house, car, job, etc.) and make sure that you are glorifying and praising God for them instead of worshiping them. Do you worship God because of Who He is or the gifts that He gives?

In Christ,
Lee
Soli Deo Gloria!
Posted by Lee at 11:14 AM No comments:

Too Busy Not to Pray 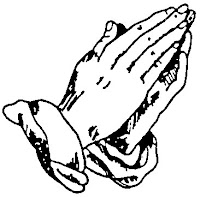 But now even more the report about him went abroad, and great crowds gathered to hear him and to be healed of their infirmities. But he would withdraw to desolate places and pray.


After reporting on Jesus' healing of a leper, Luke makes a statement describing Jesus' growing popularity. Jesus told the man He healed to tell no one, but go and show yourself to the priest, and make an offering for your cleansing (v. 14). He often told those whom He had healed to keep quiet about it, not because He wanted to keep His Messiahship secret but due to the possible misunderstanding that might arise since the Jews expected a political Messiah who would free them from their Roman oppressors. In fact, at one point Jesus realized that the people wanted to take Him by force to make Him king after they witnessed the miracle of Him feeding the five thousand (John 6:15). Jesus will one day reign on this earth as king but that was not God's purpose in Christ's first advent. However, Luke informs us that the news about Him was spreading. Perhaps this man in his excitement over his healing just could not keep quiet about it and told everyone that he knew about who Jesus is and what He has done.


The word that had been spreading about Jesus led to the growth of the crowds that came to Him. Several places in the gospel accounts we find massive size crowds flocking to Jesus. This led Him sometimes to preach from a boat (Matthew 13:1) or on a mountaintop (Matthew 5:1). Many people were gathering to hear Him since unlike the other rabbis who would piggyback their teachings on the past, citing "rabbi so-and-so said," He taught with His own authority (Matthew 7:28-29; Mark 1:22). Many also came to be healed of their infirmities because they had heard the reports of His miracles and healings. Some may have come to find out more about the man Himself, wondering if He might be the Messiah they had read foretold by the Scriptures. These crowds would have kept Jesus pretty busy as they demanded much of His time. However, Luke informs us that Jesus never became too busy to pray.


After mentioning these growing crowds, Luke quickly points out the importance of prayer in Jesus' life. He states that He would withdraw to desolate places and pray. The tense of the verb withdraw in Greek indicates that this was a continual occurrence in Jesus' life. He did not withdraw one time for one of the crowds but on a regular basis would depart from the growing crowds and find a desolate place to commune with His Heavenly Father. Instead of allowing the crowds to crowd out His time with His Father, He simply would leave the crowds and get away to pray. While the crowds were important, His attention to His Father's will was more important. In fact, just about every major event in Jesus' earthly ministry was preceded by Jesus spending time in intense prayer. It was while Jesus was praying after His baptism that the heavens were opened, and the Holy Spirit descended on Him in bodily form, like a dove (Luke 3:21-22). He spent the entire night in prayer before He chose His twelve disciples (Luke 6:12-16). It was as He was praying that Jesus became transfigured and Moses and Elijah appeared to Him on the mountain (Luke 9:28-31). In the Garden of Gethsemane, right before His arrest and the night before His crucifixion, we witness three prayers by Jesus for God to take away the cup of His wrath that would be poured upon Him but also His submittance to God's will to be done (Matthew 26:36-46/Mark 14:32-42/Luke 22:39-46). Jesus always made time for prayer, even in the midst of a crowd.


We too have crowds of things that demand our time. Our days are full of endless lists of chores and tasks that must be done. It can be overwhelming at times. However, we must be careful not to allow ourselves to get "too busy to pray." Like Jesus, we may have to withdraw from the crowds sometimes to ensure that we spend crucial time in prayer. Martin Luther once got up early one morning and realized that he had so much to do that day that he decided he needed to spend an extra hour in prayer. Thus, he prayed three hours instead of two. May God give us the grace to see that we can never be "too busy to pray" but instead are "too busy not to pray."


In Christ,
Lee
Soli Deo Gloria!
Posted by Lee at 4:36 PM No comments: