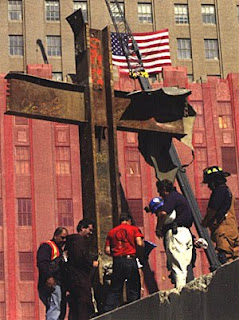 Today thousands in the nation take time out of their busy schedules to commemorate and remember those who lost their lives in the horrible tragedy which occurred the morning of this day eleven years ago.  Many of us remember how that day changed the way we thought about the country, our loved ones, and even our lives.  Many still are struggling with what they have seen, or with those they have lost in the tragedy.  Some lives may never be the same again.  While not belittling the victims of the tragedy, I want to look at what those who are still living can learn from this event.

The days following the 9/11 attacks brought several questions.  Several of these questions concerned God and His role in the event.  People struggled with trying to grasp any reasons God may have allowed or permitted this to happen.  Some wondered if the people who went for what they thought would have been a normal day at work deserved to play the victims of such a horrible scenario.

Clearly God was in control of that day and is still in control of our world today.  Scripture tells us that God works all things after the counsel of His will (Ephesians 1:11).  Through Amos God communicates, If a calamity occurs in a city has not the LORD done it? (Amos 3:6) and Jesus says that a sparrow does not fall to the ground apart from your Father (Matthew 10:29).  Even Satan himself is under the sovereignty of God.  Jesus acknowledged to Peter that Satan could not test the disciples' faith without God's allowance.  Simon, Simon, behold, Satan has demanded permission to sift you like wheat (Luke 22:31).  Likewise, Satan could not tamper with Job without God's permission and He set clear boundaries where Satan would not be able to trend.  In the first meeting with Satan, God agreed to let him test Job but would not allow him to put forth your hand on him (Job 1:12) and the second time God gave Job into his control but would not permit him to kill His righteous servant.  Behold, he is in your power, only spare his life (Job 2:6).  This is a very comforting truth.  Our lives may seem like they are spirling out of control, but the truth is that we are still in God's hands and He is working to bring things to His ultimate purpose.  You may be down at your lowest, but we have hope that God IS in control and causing all things to work together for good to those who love God, to those who are called according to His purpose (Romans 8:28).  Even in the worst of times, we have comfort knowing there is a loving and good God in control who has a purpose in the suffering.  God was there that day on 9/11 and, even amist the sorrow, several testimonies to His goodness have been proclaimed.  His sovereign hand never left the situation!

The second major question the World Trade Center attacks spawned is one which is a common response to every huge natural disaster or catastrophe:  "What did this group do to deserve this?"  This was seen after the tsunami in India as well as New Orleans with Hurricane Katrina.  In fact, Jesus was asked a similar question about 2000 years ago.  While speaking to a large crowd, a group informs Jesus about an atrocity which Pilate had committed.  The exact situation is unknown to us today but we can infer that it had something to do with a slaughter of Jews during their sacrifices.  Not only was this a terrible occurrence, but it took place during worship which made it even more horrendous.  Jesus realized right away the question that they had concerning this issue.  They thought that this plight was the result of them being greater sinners than all others.  However, Jesus sought to turn their perspective completely around.

Instead of agreeing with their assumption, Jesus took the focus off the victims and placed it on the questioners.  The reason this group was slaughtered was not because they were greater sinners.  The ones who were killed were no more sinners than the ones commenting concerning them.  (Note: This does not necessarily mean that the events God permits to occur are punishment for specific sins.  John 9 makes it clear that, while a result of the curse of sin, not all infirmities and incidents are due to specific sins.)  Those who died in the tsunami, in the 9/11 terrorist attacks, and with Hurricane Katrina were no more sinners than those of you reading this note as well as the one writing it.  We deserved the same!  I will never forget a powerful sermon my pastor preached right after the tsunami a few years ago.  He told us that the question is not "why them?" but should be "why not us?"  We didn't deserve God's mercy to not have the tsunami happen in America, or to not have been in the Pentagon or World Trade Center on that day, as well as having the hurricane wreck havoc on the NorthEast or MidWest.  As Scripture tells us, for all have sinned and fall short of the glory of God (Romans 3:23).  We get so used to God's mercy we have problems when He shows us His wrath.

Jesus actually warns the crowd of an even greater fate, much worse than what happened with Pilate and the later example of the falling of the tower of Siloam.  Unless they repent of their sins, they will perish (Luke 13:3,5).  This is Jesus' urgent plea to those who are lost in sin.  Repentance means a turning from sin.  It is the flip side of faith.  One turns from sin in repentance and then turns toward Christ by placing their faith in Him.  The likewise may refer to the sudden and unexpected death of those in the Temple and at Siloam.  Those who went to the Temple that day to offer their sacrifices did not realize that they would not be returning home.  The possibility of the tower falling on the group in Siloam probably never occurred to them.  Likewise, if the crowd does not turn from their sins and turn to Christ they will suddenly and unexpectedly (to them) experience the punishment for their sins.  The author of Hebrews tells us that it is appointed for men to die once and after this comes judgment (Hebrews 9:27).

No one is guaranteed of their next heartbeat or breath.  If we should learn something from modern headlines, it is that death is no respecter of age.  If you have not turned from your sins and placed your faith in the Lord Jesus, then Jesus' plea for repentance is for you.  Like those in the Temple and at Siloam, you do not know when the day will come and it will be too late.   Many who left for work that morning of 9/11 did not know that they would not leave the building.  Several wives did not know that they would not see their husbands again.  I am not attempting to scare anyone, I just want to point out reality.   For us who are Christians, this is a reminder that life is too short to waste!  Let us give out Jesus' plea to those who need to hear it in our families, schools, and at our places of employment!

Praying for those involved with the attacks in any way as well as us who can learn from God's mercy,
Lee Smith
Soli Deo Gloria!
Posted by Lee at 5:41 AM No comments: